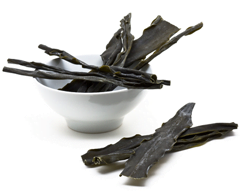 Kombu (or Konbu), is a sort of dried kelp (which is a sort of sea-weed) used in many Japanese cuisines including sushi. Kombu is considered to be an important ingredient in creating Umami (savouriness). You probably already know that Umami is a loanword from Japanese meaning “good flavor” or “good taste”.

How to use Kombu in sushi?

When preparing the sushi rice, just before you turn up the heat or start the rice cooker, throw in a small piece of Kombu. About 5 by 5 cm of Kombu should do for an average 3 cups rice batch. It is helpful at this point to make slits in one or more sides of the Kombu to help release its flavors.

Where can I get me some Kombu?

As in most sushi ingredients, you can find Kombu in your local Asian food store or Japanese market. This product is also available on our online store and through the link below.

This website uses cookies to improve your experience while you navigate through the website. Out of these, the cookies that are categorized as necessary are stored on your browser as they are essential for the working of basic functionalities of the website. We also use third-party cookies that help us analyze and understand how you use this website. These cookies will be stored in your browser only with your consent. You also have the option to opt-out of these cookies. But opting out of some of these cookies may affect your browsing experience.
Necessary Always Enabled

Any cookies that may not be particularly necessary for the website to function and is used specifically to collect user personal data via analytics, ads, other embedded contents are termed as non-necessary cookies. It is mandatory to procure user consent prior to running these cookies on your website.

Back to the top
© All Rights Reserved 2021 Make my Sushi